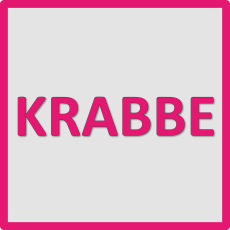 Krabbe disease is a rare hereditary disease that affects the white matter of the central (brain and spinal cord) and peripheral (nerves of the lower and upper limbs) nervous systems.

Described for the first time in 1916, Krabbe disease is expressed in several forms: an infantile form, a late onset form (late infantile/juvenile) and an adult form.

The infantile form, by far the most common, appears in infants between the age of two and six months old and develops in three characteristic stages. Early symptoms include severe irritability, muscle spasms, inability to hold the head upright (axial hypotonia), loss of acquired intellectual functions, growth retardation, feeding difficulties and febrile episodes. Then hypertonic episodes and seizures appear. The last stage is calmer, the child becomes hypotonic and swallowing problems appear, which can lead to respiratory infections. The outcome is often fatal before the age of 2 to 3 years old.

Much more rarely, the disease starts later (after the age of 2 years, or even in adulthood). The progression of the disease is slower with motor disorders and intellectual regression, but it remains highly variable, even within the same family. The first signs that occur in adults are muscular weakness, walking disorders corresponding to spastic paraparesis, ataxia (balance disorders), peripheral neuropathy, associated with sensory disorders such as burns, often an impairment of visual acuity. Cognitive functions remain preserved for a long time in adult forms.

The diagnosis evoked before the clinical picture and white matter abnormalities on MRI is made on the basis of enzymatic tests on leukocytes or in cultured fibroblasts, revealing a deficiency of GALC protein activity in almost all cases. Detection of the mutation confirms the diagnosis.

Prenatal diagnosis, enzyme screening or mutation analysis, is possible for families at risk. This screening of newborns at birth is only routinely performed in the State of New York. Genetic counselling should be offered to couples at risk (both individuals are carriers of the mutation), informing them of the 25% risk of giving birth to a sick child. Prenatal genetic screening at 11 weeks of pregnancy is then possible.

The brain controls many body functions such as posture, movement, senses, speech, thinking and memory. The flow of this information is essential. In the brain, oligodendrocytes are the specialised cells separate from neurons that make the myelin needed for the proper flow of information between neurons along the "links" that connect them, called axons.

Krabbe disease is a disorder of the lysosome functions affecting the white matter of the central and peripheral nervous systems. In cells, lysosomes are responsible for "recycling" cellular waste. But in patients with Krabbe disease, the lysosomes do not function properly and waste accumulates. The accumulation of toxic products in the oligodendrocytes (notably a compound called psychosine) leads to their disappearance (death by apoptosis), leading to the demyelination of the central and peripheral nervous systems, which prevents the proper circulation of nerve signals.

Because of the speed and severity of the disease in its infantile form, the brain damage is already too great at the time of diagnosis for treatment to be effective before irreversible brain damage leading to a bedridden state occurs. Only rare patients with either a pre-symptomatic infantile form (most often detected among siblings) or a later onset form are sometimes receptive to therapy. However, this treatment is currently limited to bone marrow transplantation, also known as hematopoietic stem cell transplantation or cord blood stem cell transplantation.  Bone marrow transplantation requires finding an immunologically compatible donor and either slows the progression of the disease or stops it from progressing, but always within 6 to 12 months after the transplant is done. This treatment is not without risks: failure to take the graft, severe reaction of the graft against the host (the donor cells "attack" the recipient's cells), severe infections, particularly viral infections due to the temporary drop in immune defences in connection with the preparation for the graft, any complication that may lead to death.

Other treatment options are currently being investigated, but only in animal forms of the disease, such as gene therapy, which involves transferring a normal version of the gene coding for the GALC enzyme to the animal cells, or enzyme replacement, which involves injecting the normal enzyme into the cells. However, this last method comes up against a physical limit: the brain is surrounded by a barrier that not only protects it, but also limits its access.

Finally, the study of chaperone proteins that allow the modification of conformational abnormalities of a mutated protein could be an interesting lead, if it could increase the enzymatic activity of the mutated GALC enzyme.

It is not at all specific to Krabbe disease: treatment of bouts of stiffness and the pain that accompanies them, motor rehabilitation, prevention of swallowing disorders and lung infections, sufficient calorie intake which may require tube feeding or gastrostomy (a tube placed directly into the stomach), prevention and treatment of scoliosis if it occurs, psychological care for siblings and parents.

It is particularly difficult in the infantile forms of Krabbe disease where bouts of hypertonia causing pain for the young patient and episodes of unexplained fever occur very frequently for a few months. In order to relieve children's pain, which remains a priority, we are often led to propose an escalation of analgesic treatment (painkillers), which also has its downside: children are more sleepier and react much less to those around them. These bouts of pain and fever disappear spontaneously. The children then appear much better and it is not uncommon to see the reappearance of real contact and even a small motor improvement. At this stage, nutritional, motor (physiotherapy, prevention of the consequences of swallowing disorders) and relational care with those around them is fundamental to maximising the children's comfort.

Thus, Krabbe disease is a very rare leukodystrophy, but particularly severe in its infantile form for which we are relatively deprived from a therapeutic point of view. Treatment leads are still in the pre-clinical stage.